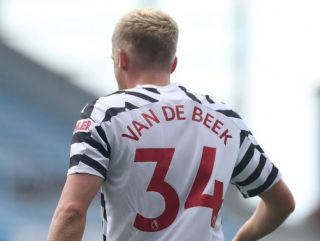 Ole Gunnar Solskjaer says Donny van de Beek was the ‘biggest plus’ as Manchester United lost 1-0 in their pre-season friendly against Aston Villa.

New signing Van de Beek played the full 90 minutes on his first appearance since signing from Ajax this summer.

That gives us some indication that he will start next week against Crystal Palace — but United were without midfielders Paul Pogba, Bruno Fernandes, Fred and Nemanja Matic at Villa Park.

Solskjaer opted to start Scott McTominay alongside the Dutchman, in behind Marcus Rashford.

“Donny was maybe the biggest plus outfield,” Solskjaer told MUTV. “He’s such a finder of space and creates time for himself with his timing and movement. I was very happy with his performance.”

The Netherlands international was better in the first half as he demanded the ball whenever he did not have it and got forward from his deep-lying role.

Although he was slick on the ball, Van de Beek could not find a way to unlock Villa’s defence to help his new team-mates score an equaliser.

Over time he will become more familiar with his team-mates, as well as English football, but I saw some encouraging signs from watching the game on MUTV.