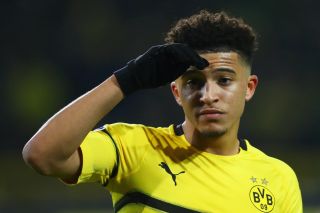 Manchester United’s hopes of landing Borussia Dortmund’s Jadon Sancho are reportedly beginning to fade as the Reds are now forced to consider alternatives according to a recent report from the Telegraph.

Sancho, 20, has been widely reported to be the Reds’ number-one summer transfer target in a move which would cost the club upwards of £100m, as per The Times.

However, despite a recent breakthrough in talks between United and Sancho’s representatives over agency fees, as per Sky Sports an agreement between both United and Dortmund has so far failed to materialise.

According to the Telegraph’s recent report a United official has admitted that the Reds’ hopes of landing Sancho before the transfer window’s deadline on October 5 are beginning to fade as officials are now forced to consider alternatives.

The report claims that Ivan Perisic, Douglas Costa and Gareth Bale all remain contenders to be United players depending on their individual availability, however, with just three weeks left to finalise deals, United really do face a race against time.

It is understood that Sancho’s refusal to initiate a move away from the Black and Yellows as well as his club’s insistence on the required fee being £108m means United may be left with no choice but to consider alternative targets.

The report concludes by claiming that Sancho will remain on United’s wish list until the end of the window but reiterates that a deal is become increasingly more unlikely.

Read more: Luke Shaw in no doubt the Reds are raring to go ahead of Premier League opener