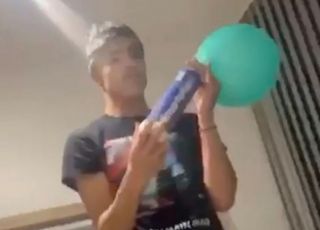 Mason Greenwood has admitted showing “poor judgement” for the second time in a week after being caught on camera inhaling a nitrous oxide balloon.

The 18-year-old reportedly took the ‘laughing gas’ weeks before his first England call-up became a scandal after his COVID-19 bubble breach in Iceland, as per Sky Sports.

Greenwood has wasted no time responding to the story — with a statement sent on Greenwood’s behalf to the Daily Telegraph.

“I have now been made aware of the health risks associated with this practice and accept that even trying it, as shown in these historical pictures, was poor judgement on may [sic] part,” Greenwood said. “I strongly urge others not to follow my example. Although I am only 18, I fully realise that I have privileges and responsibilities, but this week I have also learned that I will be judged to a higher standard because of my career as a footballer and I must respect that in future. I will learn from these lessons and I amnestying determined to repay the faith shown in me by my manager and coaches.”

With this being the second time in a week that Greenwood has attracted negative attention on himself, the youngster needs to keep his head down for a while and let his feet do the talking.

He should learn from this and take whatever advice Solskjaer gives on board.

Footballers can party with their friends but they should be more wary about smartphones and social media.

Allowing friends to put you on their Snapchat stories when you play for Manchester United is ridiculous. Greenwood must wise up.

Of course, this is an 18-year-old we are talking about and he deserves the benefit of doubt.

Greenwood still has the world at his feet.