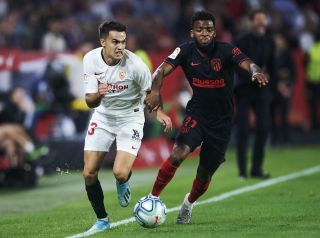 Real Madrid’s Sergio Reguilon reportedly wants to join Manchester United amid speculation surrounding his long-term future after being frozen out by manager Zinedine Zidane according to leading journalist Fabrizio Romano.

Reguilon, 23, has emerged as one of Europe’s brightest talents after the Spanish left-back enjoyed a hugely impressive campaign last time out.

The attacking full-back played a massive role in on-loan side Sevilla’s 2019-20 success after the La Liga side won a record breaking sixth Europa League trophy.

Reguilon featured a total of 38 times for Sevilla last season and was directly involved in an impressive eight goals including a goal against AS Roma in the Europa League’s first round knockout.

The talented defender has been hotly tipped to join up with Ole Gunnar Solskjaer after an orginial report from Marca claimed United were following the 23-year-old.

Despite United’s strong links to Real Madrid’s Reguilon a proposed move has far failed to materialise, however, the latest report in this exciting and ongoing saga comes from leading journalist Fabrizio Romano who claims the Spaniard would ‘love’ to join United.

Romano goes onto explain that Real Madrid’s demands for a potential fee of €30m are causing problems as the United hierarchy refuse to pay that much.

Sevilla are in advanced talks to sign Marcos Acuña from Sporting – as per @abolapt. Deal to be done soon.

No more chances to come back for Sergio Reguilon… he’d love to join Manchester United this summer. #MUFC considering him as an option but won’t pay €30m 🔴 #transfers

This one looks to rumble on right until the end of this summer’s transfer window on October 6.