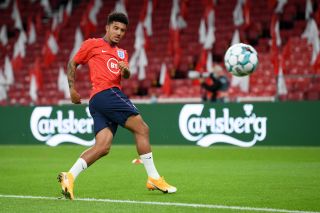 United have expected fans to be patient this summer and Gary Neville admits that’s not easy when you see rivals like Chelsea buying top players, as per Football.London. Van de Beek is one of them too, I’m not saying otherwise, but they’ve finally sealed a deal for Kai Havertz and we’re still haggling over Jadon Sancho.

Fine margins but we finished ahead of Chelsea last term — by one point. Do you think after their signings this summer that they will move forwards or backwards?

United fans have every reason to be impatient because just one signing at stage isn’t good enough. It doesn’t tell me the board are willingly backing Solskjaer to get the job done.

Starting with the pursuit of Jadon Sancho which is ongoing. The Borussia Dortmund winger has been United’s top target all summer.

And it doesn’t look like they will end their hunt for Sancho anytime soon, and losing out this summer will make it very difficult to get him in the future.

Borussia Dortmund have refused to drop their £108m (€120m) price tag for Sancho, yet United have made progress in talks with his entourage which was the primary reason for holding up a deal.

However, the signing of Van de Beek has given United something to think about when it comes to splashing the cash on the right winger.

The £35m transfer fee agreed with Ajax for Van de Beek has apparently brought executive vice-chairman Ed Woodward to the conclusion that Sancho is worth around £80m in the current market, as per the Daily Star.

That seems about right but try telling that to Borussia Dortmund. They are the ones about to lose their star asset.

Former Liverpool midfielder Don Hutchison reckons the arrival of Sancho at Old Trafford would push on United’s other attacking players.

Hutchinson told ESPN: “I think the problem for Ole, which is inevitable for him at this stage with the players he’s got, is that you could pick their strongest 11, but when it comes top changing tactics, apart from maybe Dan James, the bench isn’t that strong.

You look at the bench Man City have on any matches and it helps you understand why they win so many games, even at the end of matches when the scoreline is tied you still fancy them because of the personal they as substitutes.

The Reds have reportedly made a breakthrough in their bid to sign Sergio Reguilon.

After spending last season on loan at Sevilla, the Real Madrid left-back is on the move again because Los Blancos are well-stocked at left-back with Marcelo and Ferland Mendy.

Reports in Spain have insisted that a buyback clause would need to be included in any deal.

I could never imagine United agreeing such a deal with another elite club — which would allow Real Madrid to swoop in after Marcelo retires and by that time Reguilon should be a more complete left-back.

Spanish publication El Desmarque claims Real Madrid manager Zinedine Zidane is now happy to scrap the buyback clause idea, as it will help get United on side, with the La Liga champions still thinking about a future with Paul Pogba.