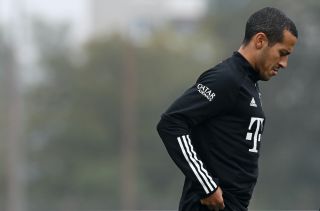 Online bookmakers have slashed their odds on Bayern Munich midfielder Thiago Alcantara joining Manchester United on or before October 6.

Prior to this afternoon Thiago was 4/1 to join United and 5/2 to join Liverpool, however, within the last couple of hours the bookmakers have slashed their United odds to 11/8 and kept Liverpool’s at 5/2.  The new odds now see Ole Gunnar Solskjaer as the heavy favourite to sign the elite Spanish midfielder over domestic counterpart Jurgen Klopp.

Thiago, 29, is widely reported to be available this summer for a mere €30m, as per Sky Sports, however, with previous favourites to land him Liverpool struggling to get the deal over the line, United have now emerged as the favourites to secure the Spaniard.

Thiago’s availability comes off the back of yet another stunning campaign last time out with Bayern Munich which saw him lift the 2019-20 Champions League title.

The highly-rated midfielder featured 40 times for Bayern Munich last season and was directly involved in five goals, however, arguably the most impressive aspect to Thiago’s game is his ability to make things happen from deep positions.

The experienced Spaniard boasted a whopping 95% (own half) and 87% (opposition half) domestic passing accuracy percentage last season (SofaScore).

With United now seemingly leading the charge to sign Thiago the race is certainly hotting up. Which red shirt will Thiago be playing in next season?

Let us know in the comments section below.