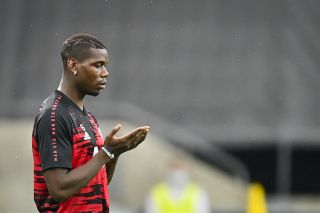 Pogba tested positive for COVID-19 last month but he reported back to Carrington ahead of the team’s friendly at Aston Villa on Saturday.

The illness ruled Pogba out for France in their Nations League wins over Sweden and Croatia, but at least Anthony Martial was called back into Didier Deschamps’ squad.

Home taking some vitamin D, we are feeling much better now🙏 thank you @dolcegabbana & @alessandro_pera for always taking care of us💚

It has not been confirmed whether Pogba will travel with the squad to Villa Park as he has only just returned to training. After being sick it may take Pogba more time to reach the required levels of fitness.

Pogba and his team-mates will want to set the record straight this season and show more consistency throughout the Premier League campaign.

Our form after Christmas last term was terrific but we need to replicate that all year round. That way when it comes to the business end of the season we’ll be there or thereabouts.

United are back in the Champions League this season so there will be extra games that the likes of Pogba will be eager to play in.