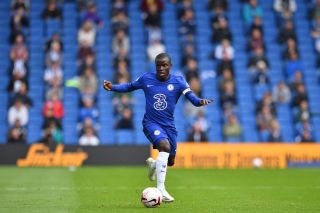 According to reports in Italy, Manchester United are preparing a shock transfer swoop for N’Golo Kante.

Chelsea have spent a lot of money on signings already this summer. Selling the Frenchman would go some way towards recouping a portion of that money, but at the cost of losing one of the best midfielders in the Premier League.

Although some fans will look in awe at their business this summer, it would be a surprise if they all gelled in their new team quick enough to make a significant enough difference that would see Chelsea compete for the title this season.

United have approached this transfer window with a more long-term approach, signing a number of players for the academy, as well as Donny van de Beek who goes straight into the first-team.

Now according to Tuttosport, Ole Gunnar Solskjaer is ready to make a bid to land the Chelsea midfielder, who won the World Cup in 2018 partnered by United star Paul Pogba.

Kante has another three years left on his contract at Stamford Bridge after agree to terms in November 2018. The report suggests Chelsea would accept an offer of £55m for him.

While it would be a super coup for United, I can’t see Chelsea entertaining an offer from a domestic rival.

That said, his role in the team has changed down the years and Frank Lampard may feel it’s a good time to move him on.

A call that could have consequences.

Chelsea start their 2020-21 Premier League campaign away to Brighton on Monday night.