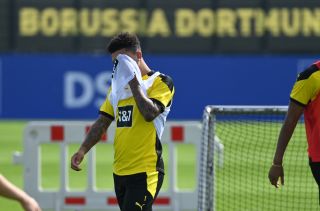 If Manchester United supporters require proof football is tantamount to religion, they need only reference their own reaction, or at least those of some fellow Reds, to news that budding starlet Mason Greenwood was sent home by Gareth Southgate after he and Phil Foden invited girls into their hotel rooms at the England camp in Iceland. If further proof is needed, they can recall Harry Maguire’s troubles in Greece or a rehabilitating Paul Pogba dancing at his brother’s wedding just outside Paris.

The trio all found their professionalism and loyalty to the club questioned. It was as though they reported each day to the AON Training Seminary, their signatures on contracts equating to vows of celibacy and poverty [at tens if not hundreds of thousands of quid per week], their private lives sacrificed in service to the faithful.

Nor is this an attitude unique to United supporters. Every club’s base demands the same devotion from their squad. Yet, it makes no sense, does it?

First, it’s hypocritical. When we dreamt of pulling on the shirt as youngsters, we didn’t imagine ourselves as saints giving our lives to a cause like Duncan Edwards or any of the other poor souls who didn’t survive the trip to Munich. More likely, we envisioned ourselves as the next George Best or David Beckham, wearing the latest fashions, driving outlandish cars, dating attractive women. If the club is willing to pay youngsters all that money, why shouldn’t they enjoy it? Am I right?

But no, our message to the Greenwoods, Lingards and Rashfords who come through Carrington is do as we say, not as we’d do. We should consider ourselves lucky that Marcus Rashford listened. Most players won’t.

If some United fans can’t admit they’d splash the cash as soon as it hit their bank account, claiming they’d be conservative and responsible by planning and budgeting carefully for the future, they should re-examine their anger at the club’s deliberate transfer policy. Many feel the Glazers swim in money and vilify them for not giving blank cheques to every manager since Sir Alex Ferguson. They don’t understand the way to accumulate wealth is not to spend on every impulse but to invest for value.

The latest transfer news finds Ed Woodward and co making progress in their pursuit of Borussia Dortmund winger Jadon Sancho, as per Sky Sports. Many will be heartened. But a large swathe of Stretford Enders wonder why the club simply doesn’t pony up the £120 million BVB steadfastly demand for the former Manchester City wunderkind. They wonder why the club doesn’t just meet the youngster’s exorbitant wage demands.

The problem is spending over the top and giving players everything they desire promotes the wrong culture. Anyone with children knows better than to spoil their son or daughter. If we had good parents, they taught us responsibility by demanding we earn things. Paying footballers top wages doesn’t encourage them to work harder. It only tells them they’re special. Making life more difficult says yes, but not that special. Investing the time to mould starry-eyed boys into responsible adults pays dividends.

That isn’t to say the club shouldn’t sign Sancho. But they should be aware why the England international wants to leave Dortmund. He first hinted at his wanderlust after being disciplined and publicly shamed for returning late from international duty and tardiness to training sessions.

In other words, his maturity can be questioned every bit as much as Greenwood’s. Worse, any transgressions will prove more embarrassing and costly to the club given his valuation.

Unlike Solskjaer’s latest signing, Donny van de Beek, Sancho wasn’t eager to accept Ed’s first offer, honoured at the opportunity to contribute to such a legendary club. The Camberwell native emphasises his own ability, believing he can make United better rather than vice versa. While he certainly can, he can also make it worse if the manager and chief executive do not set the right tone from the beginning.

Any player United signs, not just in this window, but in the future, must know he is expected to bring humility and confidence to the clubhouse in equal measure. He needn’t be a chaste priest, forsaking life’s pleasures, but he must be professional.

Throwing the Glazer’s money at special talents doesn’t guarantee professionalism, though. Ed and Ole must also throw the weight of Manchester United’s legacy at the feet of the young stars they hope will build the next great Old Trafford dynasty. Both manager and chief executive must demand these young men hoist up that legacy and carry it on their shoulders.

If it takes time [and it always does] to recruit committed footballers such as Van de Beek or to convince precocious stars like Sancho to demonstrate their dedication, so be it. If Manchester United is a religion, its fans shouldn’t want priests in their squad; they should desire crusaders.