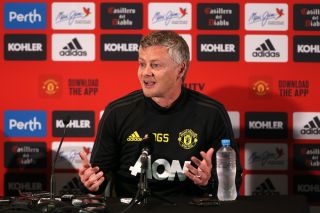 Manchester United manager Ole Gunnar Solskjaer has given fans a transfer update amid growing concerns the club will be forced to settle with just the one new summer signing after midfielder Donny van de Beek arrived from Ajax.

United sealed a quick deal for van de Beek earlier this month after it was announced that he had joined from popular dutch side Ajax in a move costing up to £39m, as per Sky Sports.

Despite van de Beek’s arrival, the United hierarchy have failed to bring in a second squad addition, however, according to Sky Sports yesterday, the Reds have made a break-through in the ongoing talks to sign Borussia Dortmund’s Jadon Sancho.

There is a general feeling among fans that the club still need to add squad depth at centre-back, midfield, left-back and in attack, however, with just three weeks left of the window, it is becoming increasingly unlikely that the Reds will reinforce all of those areas.

Ahead of the domestic season’s opening on the weekend, speaking live on BBC Radio5 Live Solskjaer has given a transfer update and has claimed that the club will not seek quick fixes, as quoted by Manchester Evening News, he said: “It’s never easy to have too many new players in the team, it takes time for players to gel into units.

“We will have to get the results, our response has to be about improving, getting the results but also adding players with different qualities than we have, things that we need.