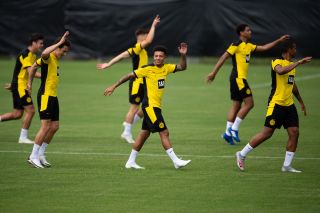 Norwegian reporter Fredrik A. Filtvedt is making a name for himself among Manchester United fans this summer.

Backed as a reliable hack by German football expert and fellow Norwegian, Jan Aage Fjortoft, so we’re keeping an eye on his United updates.

His latest is on the Sancho case which had a big development on Wednesday.

Northern football correspondent at the Daily & Sunday Telegraph, James Ducker, reported that there has been a breakthrough in the impasse over agents’ fees and personal terms where Sancho and United are concerned.

He added Sancho is keen to join United before the transfer deadline on October 5, but the next move to strike a deal with Borussia Dortmund will be anything but straight forward.

However, Mr. Filtvedt this afternoon tweeted: “Small update on Jadon Sancho: Solskjær has talked to him several times. Sancho tops the club’s wish list and even wants a transfer to United. Solskjær’s simple message to Woodward: Fix it!

“Solskjær should be frustrated that things take time, but United feel increasingly confident that they can reach an agreement with Dortmund on Sancho. United have ambitions that he is ready for the Palace match.”

Filtvedt’s latest Sancho report can be read via Dagbladet.

Read more: Daniel James must take his chances when they come at Man United, says Giggs