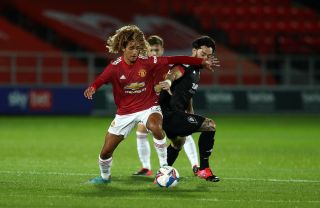 Wood who manages Mejbri in the club’s under-23s squad has taken some of the expectation off the young star’s shoulders ahead of next season as he confirms the 17-year-old still has a lot of work to do before stepping into the first-team.

Mejbri is arguably one of United’s most exciting youth prospects after the club paid a whopping £9m to secure his services from AS Monaco last summer, as per TransferMarkt.

Often drawing comparisons to world-class midfielder Paul Pogba due to his similar attributes and playing style, Mejbri has thoroughly impressed in his first year with United’s academy.

The highly-rated midfielder made his competitive EFL Trophy debut last night as the young Reds thrashed Gary Neville’s Salford City 6-0 with Mejbri being directly involved in three of the goals.

Speaking in light of Mejbri’s impressive debut, as quoted by Manchester Evening News under-23s manager Wood said: “As much as he’s a good player there’s still a long way to go with Hannibal, he’s still got a lot of learning to do, a lot of improving.