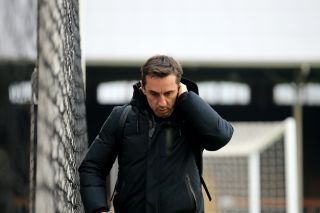 Manchester United have been linked with a move for Bayern Munich midfielder Thiago Alcantara this summer and Gary Neville has offered his thoughts on the speculation.

Thiago is coming off the back of an incredibly successful season with Bayern Munich, winning the treble, and after seven years in Germany and aged 29, the Spain international presumably wants a new challenge before he reaches the wrong side of his 30s.

There’s one big move left in Thiago if he wants it. Liverpool, as well as United, are reportedly targeting the midfielder, as per the Daily Mail.

His wife posted a photo (via Instagram) of a relaxed looking Thiago with her and their children captioned: ‘The four of us,’ after he was given an extended break by the Bundesliga giants following the Nations League fixtures.

The four of us ❤️

Thiago’s Bayern team-mates were back in training on Tuesday, while he’s been sunning himself in Barcelona.

“United weren’t really strongly linked with him and I can see why with Pogba and Fernandes. But watching him play in a two-man midfield for Bayern Munich, I don’t think he needs to play in a forward role,” Neville told 90min.

“I think he can play deeper and United’s players in that position — Fred, [Scott] McTominay, [Nemanja] Matic — have all done okay. But if [Thiago] was there… I think he’s clever enough to intercept, read the game and do the things that a holding midfielder can.

“You don’t need to be six feet tall, tackle and quick to play in that position anymore. You just need to be intelligent and understand the game, and he’s got that in abundance. I don’t know why United wouldn’t try and get him, particularly if he was going to Liverpool because it would strengthen them.”

Thiago would strengthen any side in the Premier League and if he’s on the move this summer you’d think United would be knocking on Bayern’s door.

A claim cited by reporter and former footballer Jan Aage Fjortoft suggests Ole Gunnar Solskjaer has had contact with Thiago.

The primary stumbling block for United is Thiago’s wage demands (see tweet below).

Solskjær has talked to Thiago personally.
But so far his wage – demands are too high @FAFiltvedt

We’ll have updates on Thiago as soon as anything emerges.