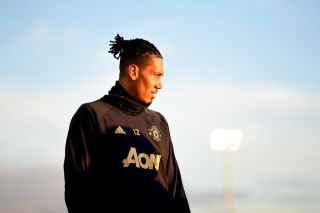 Manchester United centre-back Chris Smalling has reportedly missed training at the club’s training complex Carrington as it emerges that his proposed move to Italian side AS Roma nears completion.

Smalling, 30, spent last season on-loan with AS Roma and enjoyed an impressive campaign after being on of the side’s most consistent performers and even managed to find himself being directly involved in 5 goals in 30 domestic appearances.

Despite returning to parent club United last month the English defender now looks set to end his 10-year spell with the Reds and rejoin AS Roma on a permanent deal after it has been reported by Telegraph that the 30-year-old has missed training with United.

Leading journalist Fabrizio Romano also confirmed last week that the defender’s move back to AS Roma is getting closer and that Smalling himself wants the move.

The agreement between AS Roma and Manchester United for Chris Smalling is now getting closer. Smalling wants to come back. 🔴 @SkySport #Roma #MUFC #ManUtd

Romano also confirmed at around the same time that the Reds are actively in the market to bolster their centre-back options despite all efforts seemingly being geared towards landing number-one target Jadon Sancho after a break-through in talks, as per Sky Sports.

Manchester United expect to receive a new bid soon from AS Roma to sell Chris Smalling on a permanent deal. Man Utd board are also working to sign a new CB if a ‘good opportunity’ will be on the market on next weeks. 🔴 #MUFC #ManUtd