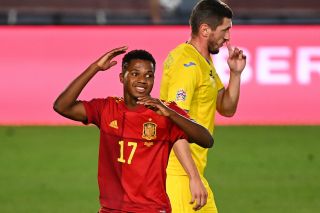 On Monday we brought you reports from Spain’s Mundo Deportivo stating Manchester United are ‘stalking’ Ansu Fati ‘more than anyone’ yet Barcelona don’t appear worried that they will lose their prodigal son.

Fati has had an incredible year in which he was the only saving grace of Barcelona’s miserable season. At 17, he became the club’s youngest ever scorer and the youngest player to find the net in the Champions League.

The Barça teen topped it off recently as he became the Spanish national team’s youngest ever scorer.

However, United’s interest has hit the media (via Daily Star) and it won’t surprise you given the amount of young Spanish talent we’ve signed this summer.

This is enough to suggest United are watching the Spanish market very closely and I find that encouraging.

The biggest difference with Fati is that he’d join the first-team immediately.

In order to try block out serious interest in Fati, Barcelona are preparing to renew the player’s contract — increasing the release clause to €400m, as per Mundo Deportivo.