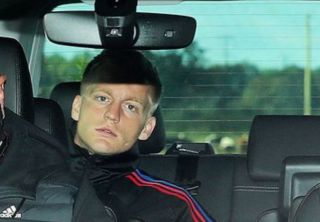 Donny van de Beek only landed in Manchester on Wednesday after completing his move to the Red Devils. He arrives after playing in the Nations League with the Netherlands national team. Caretaker coach Dwight Lodeweges stood in for the departed Ronald Koeman for the last two games, with the legendary Dutchman taking charge of Barcelona.

Van de Beek now has a career with United to look forward to — Wesley Sneijder felt the need to comment and said the midfielder is better suited to the Premier League than La Liga, where it recently looked like he was heading… He became a star player at Ajax but now is a good time to challenge himself in more difficult surroundings.

Now that he’s been to Carrington, Van de Beek will have met some of his new team-mates and club staff.

Hopefully he will settle in quickly and hit the ground running on the pitch. There’s going to be a lot of competition for places in midfield, which is what Ole Gunnar Solskjaer needs to build a side capable of winning the Premier League title.

That’s what Van de Beek and his some of his new team-mates aim for.