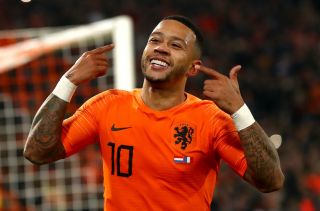 According to Fabrizio Romano, the former Manchester United forward has agreed on a move to Barcelona, though the two clubs remain in talks over the deal.

It’s yet to be finalised but Depay looks set to join Barcelona.

Depay was considered a flop during his time at United, failing to produce the same level of performance he previously showed in the Eredivisie, however, a rediscovered his mojo at Lyon and currently leads the line for the Netherlands national team.

Now 26, Depay never got going at United, scoring only seven goals in 53 appearances before being sold to Lyon.

Whether he’s the right man for Barcelona remains to be seen — but their business in recent years warrants criticism. They’ve made far too many questionable purchases down the years, and year-by-year became more reliant on an ageing Lionel Messi.

Memphis Depay have agreed personal terms with Barcelona after contacts started days ago. But final agreement is still to be reached between Barça and OL – talks ongoing.
Barça are negotiating also with Wijnaldum agents – no opening bid to Liverpool yet. 🔵🔴 #FCB #LFC #transfers

Depay has scored 57 goals in 139 appearances for Lyon.