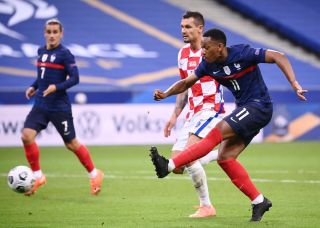 Anthony Martial is back playing for France and causing trouble for defenders.

You could say it’s what he does best but Martial has been out of the international scene for some time. Only after his incredible form for Manchester United last season Didier Deschamps said it was time to bring him back into the squad.

And on the basis of Tuesday night’s performance, the 24-year-old striker repaid the faith.

Martial has plenty to offer France, as he showed against Croatia as the World Champions won 4-2. The Manchester United forward bagged an assist and had a goal credit removed by UEFA — seen as an own goal.

A busy night for the United man and there were plenty of Reds watching to cheer him on.

Martial might be coming for the golden boot — he’s upped his game so so much recently. Very close if not already world class imo. pic.twitter.com/CUI5cOEz3w

Solskjær has reinvented Anthony Martial, fast becoming one of the most balanced forwards in the sport. His progression this year has been insane, not surprised that both club and country are reaping the rewards. With Paul Pogba/Fernandes behind him next season, sky’s the limit.

Anthony Martial has a goal and an assist in the first half for France against Croatia.

We’re witnessing a special player finally announcing himself on the international stage. pic.twitter.com/4LaHhykzaV

It's no surprise Martial is ripping it up now. Footballers thrive on confidence.

From giving him no 9, making him our main striker to coaching him to score scruffy goals & urging him to stay central – Ole did just that.

Congrats Martial, can't wait to have you back home. #AM9

Not to be reactionary or anything but Anthony Martial might be the best #9 in football history uno..

Martial also has a huge season ahead of him after showing the world last term that he has the ability to lead the line for United. Question marks have always existed over his consistency but he began to answer his critics by scoring goals to win  games.

That’s his good and if he can continue doing that Manchester United won’t need to spend excessively on a new centre-forward. That said, Odion Ighalo will need to be on his toes and ready to pounce when the opportunity rises.