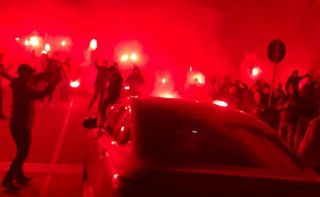 The midfielder started in Netherlands’ 1-0 defeat against Italy in Amsterdam last night.

Italy were the superior side throughout the match and a goal from Nicolo Barella was enough to seal the win.

I watched the game as a neutral and expected a lot more from the Netherlands, but they never really got going and it’s hard for a player in Van de Beek’s role to have any impact when his team didn’t have much possession.

His overall performance was a quiet one.

But after the match, outside the Johan Cruyff Arena, Ajax supporters congregated to bid farewell to Van de Beek as he jets off to start his life in Manchester.

It happens very often that the best Ajax players leave, without there being the opportunity to say goodbye to the fans. And vice versa. It’s not as if he could conduct a lap of honour in the Johan Cruyff Arena when matches are still being played in empty stadiums everywhere.

With that in mind, Ajax supporters came together after the Netherlands match to see Donny off because they see him as one of theirs. A product of Ajax’s world renowned football academy.

The Ajax fans sang “Donny van de Beek, Van de Beek, Donnnyyy van de Beeheeek,” as the player got out of his car. It was clear that he was pleasantly surprised by the events despite having just lost a Nations League match against the Italians.

“Boys, thank you for standing here. That really does me a lot, you may know that. That is really appreciated guys,” Van de Beek told supporters, as per Ajax Life.

He added: “I hope that supporters will be welcome back in the stadiums soon. I would like to say goodbye to you in a full Arena.”

Van de Beek is opening a new chapter in his career and every single one of us hopes it’s a successful one.

United’s first Premier League game of the season is against Crystal Palace and it’s likely to be Van de Beek’s first competitive game for the club.