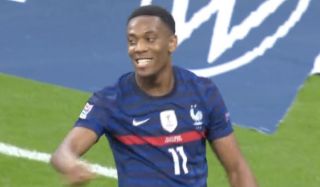 Manchester United’s Anthony Martial has carried his impressive form into the international break after perfectly setting up compatriot Antoine Griezmann and then shortly followed it up by putting the ball into the back of the net himself. Unfortunately FIFA have ruled Martial’s goal as a Croatian own goal, which is harsh.

Martial, 24, has enjoyed a thoroughly impressive campaign last time out after a superb 35 goal contributions for Manchester United in 48 appearances in all competitions saw him have easily his most prolific domestic campaign to date.

Following on from his amazing domestic form, Martial who is currently on international duty with his country France is back in action tonight in the Nations League against 2018 World Cup finalists Croatia.

Martial’s France were trailing 1-0 but a quick fire assist followed by forcing Croatia to score an own goal by United’s number-nine has put his country back into the lead.