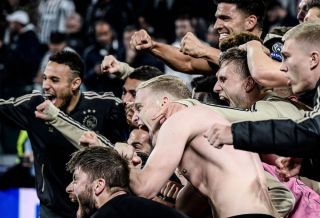 Manchester United’s summer signing and former Ajax midfielder Donny van de Beek has posted a picture of himself with agent Guido Albers as the pair prepare to fly to Manchester.

van de Beek, 23, signed for United earlier this month after his £39m move from Ajax was confirmed, as per Sky Sports however, since the midfielder’s transfer was confirmed he has been away on international duty with his country Holland.

The talented midfielder is now finally set to join up with his new United team-mates after posting one final goodbye video to Ajax fans.

van de Beek will join the rest of the United camp ahead of the Red’s Premier League opener against Crystal Palace on September 19.

Donny en route to Manchester from Amsterdam with his agent.

One response to “Photo: Donny van de Beek heads for Manchester with his agent”