As reported by Fabrizio Romano yesterday, Spanish left-back Sergio Reguilón has been offered to Manchester United as the window draws to a close in just 4 weeks time.

With the Reds looking to increase their squad depth as shown with the signing of Dutch outlet Donny van de Beek from Ajax, United are now looking to strengthen the left-back position currently held by 2018/19 Sir Matt Busby Player Of The Year Luke Shaw.

Shaw has struggled with many injuries during his time at Old Trafford, missing 113 games (via Transfermarkt) for United since 2014. The signing of Reguilón makes sense as healthy competition can go a long way in a title challenging squad.

The Spaniard is just 23-years of age, who spent the past season on loan at Europa League winners Sevilla. Reguilón has been part of Real Madrid’s youth setup ever since he was a boy, making his senior debut for the Spanish giants in an away loss at CSKA Moscow in the Champions League back in 2018. He also recently made his debut on the international stage for Spain just days ago, in a 4-0 win against Ukraine where he assisted Madrid teammate Sergio Ramos for his second goal of the game.

Sergio Reguilón has been nothing shy of a gossip mill recently, sending Manchester United fans into a frenzy after removing clubs Sevilla & Real Madrid from his Instagram profile while following United star Mason Greenwood. United ‘keeper David de Gea added fuel to the fire, posting a photo of himself and Reguilon to social media whilst on international duty. 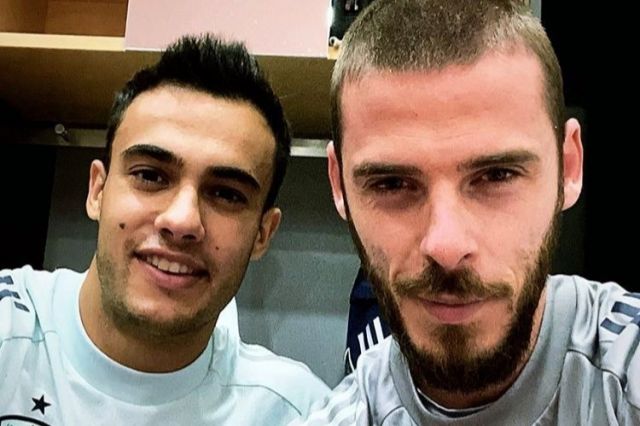 Sergio Reguilón was voted in insider.com‘s La Liga Team of the Season for the 19/20 campaign, scoring 2 goals and assisting 4 in 31 appearances for Sevilla. He also added a goal and an assist in Sevilla’s winning Europa League campaign, assisting Suso’s finish in the semi-final against United and scoring in their 2-0 win against Roma in the last 16. On top of the La Liga Team of the Season achievement, Reguilón also made his way into the UEFA’s Europa League Squad of the Season alongside many of his teammates.

The impressive left-back finished the season with an 83.13% pass completion rate, with one-versus-one.com highlighting his main strengths as passing and defending. It’s blatantly obvious that Manchester United are in need of a new left-back ahead of the 20/21 campaign, with Luke Shaw’s recurring injury record and Brandon Williams’ inconsistencies showing up as red flags for many. Real Madrid are reportedly willing to allow Reguilón to join Manchester United only if a guaranteed buy-back clause is included in the deal. He could be available for around 25-30m but with current Madrid left-back Marcelo not getting any younger, if Sergio proves to be a success at United he could be on the first flight back to Madrid. We’ll have to hope Ferland Mendy is the second coming of Roberto Carlos, in that case.

In my opinion, the youngster would be a fantastic addition to the line-up, but Matt Judge and Co. would need to act fast. It is reported a number of clubs alongside United are interested in acquiring his signature such as Everton, but most likely aren’t able to compete with the Reds financially.