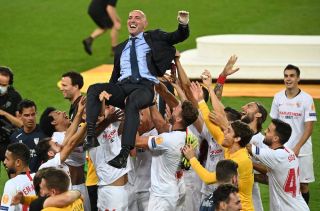 Manchester United are one of the clubs being heavily linked with Real Madrid defender Sergio Reguilon.

The left-back spent last season on loan at Sevilla, assisting the equaliser in their 2-1 win over United in the Europa League semi-finals, and club director Monchi has made it no secret that he would have him back in a heartbeat.

Speaking to Estadio Deportivo, Monchi said: “Regarding the issue of Reguilon, I already said it, we would love to have him here but it is complicated because there are economically very strong rivals with whom we are not in a position to fight.

“We are in a health and economic crisis, so we are going to put it down when it comes to talking about quantities, luckily it has caught us in a good circumstance, but the crisis also affects Sevilla FC. We are making the investment that we believe are appropriate to strengthen the workforce.”

Monchi (Sevilla director of football): "Regarding the issue of [Sergio] Reguilón, I already said it, we would love to have him here but it is complicated because there are economically very strong rivals with whom we are not in a position to fight." #mulive [@Estadio_ED]

United would be a look that could outmuscle Sevilla in the transfer market, and it would be a good reason for them to step away if the Red Devils have signalled significant interest.

It was originally reported by Marca that United are keen on brining the highly-rated full-back to Old Trafford after Chelsea’s signing of Ben Chilwell from Leicester City ruled them out of the race for his signature.

United could do with another left-back and I think Reguilon would come in as a starter. Competition is good and Brandon Williams is pushing on nicely, but I wonder what it means for Luke Shaw who misses the start of the season with injury.