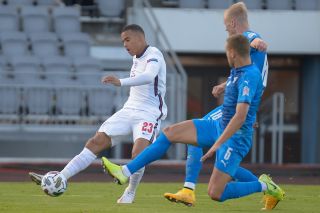 Mason Greenwood has broken his silence on the controversy that saw his first England call-up cut short this week.

The 18-year-old Manchester United forward earned his first senior call-up to the England side as he made his debut under Gareth Southgate in the recent win over Iceland.

However, Greenwood broke COVID-19 regulations by leaving the squad bubble and he’s issued an apology via Manchester United’s official website.

“Having now had the chance to reflect on what’s happened, I can only apologise to everyone for the embarrassment I have caused,” Greenwood said.

“It was irresponsible of me to break the COVID-19 protocols which are in place to protect players, staff and the public.

“In particular, I want to apologise to Gareth Southgate, for letting him down, when he had shown great trust in me.

“Playing for England was one of the proudest moments in my life and I only have myself to blame for this huge mistake.

“I promise my family, the fans, Manchester United and England that this is a lesson I will learn from.”

Greenwood’s apology sounds sincere and I can imagine he feels the world on his shoulders at the minute, but the best Manchester United players have overcome episodes like this when the media does it utmost to pile the pressure on.

He broke COVID-19 protocols and deserves a slap on the wrist.

Man City midfielder Phil Foden broke the rules with Greenwood, and yesterday he took to Twitter to apologise for his actions.

But at the end of the day, boys will be boys and maybe now he will face up to his responsibility as a top athlete.

Being sent home early from your first international break doesn’t look good, especially when it has nothing to do with injuries.

For United it might come as a bit of a relief that he won’t pick up any knocks when England take on Denmark later.