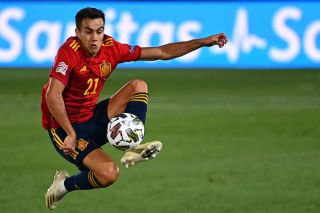 Ole Gunnar Solskjaer’s priority is attacking reinforcements before the transfer deadline, according to ESPN.

The Manchester United manager has already sealed a deal to bring Donny van de Beek to the club from Ajax, and Jadon Sancho remains a prime target but wages and payments to agents are proving difficult.

A lot of time has been spent on Sancho this summer and you begin to wonder if any footballer in the world is worth the hassle. His agents are out looking for the best deal possible — and they know it would be an easier game to play if Sancho was attracting interest from more clubs.

The reason he isn’t attracting interest from other big clubs is because no-one can pay the money to sign him. Knowing that, it was never going to be a straight forward deal to finalise.

ESPN reporter Rob Dawson touches on reports linking Real Madrid defender Sergio Reguilon to United. He says United have been made aware through intermediaries that the left-back, who spent last season on loan at Sevilla, is available.

He adds that reports in Spain suggested Madrid would demand a buy-back clause in any deal for Reguilon before letting him leave.

Moreover, Dawson notes that left-back and centre-back are areas Solskjaer would like to address in this transfer window, but the priority is injecting more goals and creativity into the team.

Sancho would certainly bring goals and assists to the table. More the merrier, right?