According to a recent report from Marca, United have continued their impressive raid on Spain’s youth talent by winning the race to the land highly-rated teenage striker Garnacho.

The report claims that Garnacho opted for United over the likes of Borussia Dortmund because he wants to follow in his idol Cristiano Ronaldo’s footsteps.

Marca claim that the youngster has already agreed to sign a five-year deal with the Reds’ youth academy in a move which will see Atletico Madrid recoup an undisclosed compensation fee.

The recent report comes after United have appeared to already land highly-rated Spanish duo Marc Jurado and Alvaro Fernandez as per Goal and Manchester Evening News after the pair were pictured in United’s official training gear. 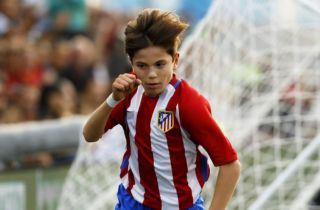 However, despite United’s apparent continued raid on the Spanish youth market, one player they do not look set to land is the highly-rated Argentinian wonder-kid Luka Romero.

Stretty News reported earlier this evening that United has recently made contact regarding Romero but the player has rejected a move in favour of staying with current club Mallorca for the time being.