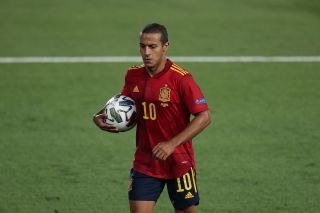 Manchester United have not progressed talks over Thiago Alcantara beyond contacting the player’s agent, according to Fabrizio Romano.

The transfer deadline day is creeping closer, with October 5 set as the closure date — just over three weeks away — and it’s time United conducted more business.

There has been little concrete details to speak of regarding Thiago’s future.

When asked about it himself, Thiago responded furiously and said there is no certainty that he will even leave Bayern Munich this summer, after winning the Champions League last season.

‘I have not told anyone that I am leaving. Every year you (the media) put me in a different club,’ Thiago said, as per the Mail.

Anyhow, both Barcelona and Chelsea have been ruled out of the race for Thiago this summer.

The La Liga giants were taken out of consideration via ESPN reporter Moi Llorens on Twitter, as seen below.

Romano provided an update this morning ruling Chelsea out of the race for Thiago’s signature too — and he confirmed that United had not progressed talks since holding discussions with the player’s agent.

Chelsea have not made any contact for Thiago Alcantara – just to be clear. Manchester United had a contact with his agent days ago but have not started any official talk with Bayern Münich. So quiet atm. And Jurgen Klopp would love to have Thiago as new #LFC signing. 🔴 #Thiago