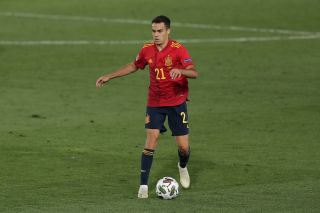 Manchester United have been offered a chance to sign Real Madrid’s Sergio Reguilon but there appears to be one grey area in his contract to be resolved.

The 23-year-old defender spent last season on loan at Sevilla — winning the Europa League after knocking Manchester United out of the semi-finals — but has returned to his parent club Real Madrid knowing he is behind two players for the left-back role.

Veteran Marcelo and France international Ferland Mendy are Zinedine Zidane’s preferred options at left-back. Quite the selection to have.

‘Zidane has put faith in Mendy and Marcelo does not want to leave.

‘The best placed are Man United, but the problem is they do not want to include a buyback option.’

Manchester United are not going to agree to a buyback option with any top club in Europe, so there’s no way that will happen.

We are not Madrid’s feeder club. They could benefit massively from having a buyback clause if Reguilon becomes a hit in the Premier League and this would play right into Madrid’s hands.

I can’t imagine Ole Gunnar Solskjaer happily signing a player with such clauses in place.

Reguilon would start ahead of Luke Shaw at left-back but his arrival would add depth as well as quality to the squad. Brandon Williams will continue to hack his way into the first team because Solskjaer won’t want to lose out on his potential to grow into a brilliant player.