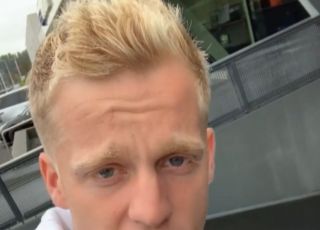 Ajax’s official Instagram account has shared a video with Donny van de Beek in the airport, ready to board a flight from Amsterdam to Manchester.

The Netherlands international is leaving his homeland to begin a new chapter in Manchester with the biggest football club in the world.

Manchester United completed a deal to sign Van de Beek last week believed to be worth £35m, as per BBC Sport.

The 23-year-old comes into a midfield that consists of Paul Pogba and Bruno Fernandes, so it’s arguably the best midfield setup a United manager has had since the days of Sir Alex Ferguson.

Van de Beek addresses Ajax supporters in his video: “It is time to say goodbye, today is my last day in the Netherlands. I’ll be flying towards my new adventure in Manchester.

“Thanks again for everyone. I’ve had 13 great years with you all. I enjoyed every single minute. Ajax is in my heart. We shared so many great memories. Championships and European games.

“I will never forget those times. Thanks again for your support!”

Now there’s a number of options who can make United’s style of play more creative, Ole Gunnar Solskjaer should turn his attention towards the defence.

Time will tell if United go down that route but they’ve only got four weeks left to conduct transfers.