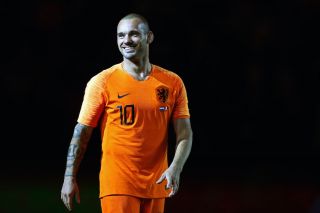 “Now is the right time,” the former Real Madrid and Inter Milan midfielder told Voetbal International. “Manchester United is a fantastic club and I think he is a better fit there too. English football suits him better than Spanish football.

“He is a complete player. I really like his running actions. He is someone who makes space, has a lot of depth and always looks for the right moments to go deep.

“He is always in the right place and always keeps playing football.”

Van de Beek became United’s first summer acquisition on a five-year contract with the option of an addition year following a £34.6m agreement, as per Manchester Evening News. He comes into a pretty strong midfield which includes Bruno Fernandes and Paul Pogba, and they are the sort of players who need to be playing in the Champions League every season.

He decided to join United despite wide speculation about a move to Real Madrid and his agent confirmed Arsenal and Barcelona were among the clubs trying to seal his signature.

“There were more clubs with interest, such as Real Madrid, FC Barcelona, Juventus and Arsenal — but it all came to an end because of the coronavirus.

“They [Arsenal] really wanted him — they just couldn’t get the money for a transfer. Even the biggest clubs struggle. Arsenal is a great club, but United will certainly be an interesting adventure.”

Sneijder’s verdict is not at all surprising one but it’s funny to see him comment on United transfers when he was forever linked with a move to the club.

It didn’t work out but fans had to listen to years of reports about how Sneijder was en route to Old Trafford. I would go as far to say it was one of the most dragged out transfer stories United were ever involved in and not sign the player in question.

Nicolas Gaitan is another who fits in that category.