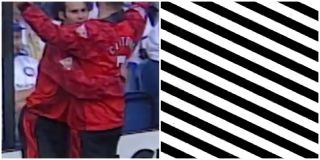 Manchester United have dropped the biggest hint yet that the third kit will have a zebra colour theme.

Pictures have done the rounds on social media, leaving most Reds in shock at how questionable it looks.

I’d trust a 6-year-old to come up with something better via Microsoft Paint.

Anyhow, the hint appears in a throwback video with Eric Cantona scoring after a delightful David Beckham cross with crafty visual editing skills.

Another page from the Cantona-Leeds story 😉📖

It looks like United are getting ready to officially announce their third kit for the 2020-21 season.

Prepare to be underwhelmed by the latest Adidas design.