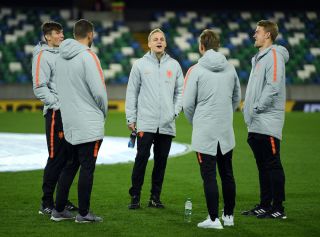 The Netherlands take on Italy in the Nations League and there’s plenty of Premier League talent on show in Dutch side.

In midfield there’s Van de Beek pulling the strings and trying to unlock the attackers against the Italian defence.

It feels nice being able to watch a game knowing one of our new signings will be playing. Not that we’ll see the whole picture tonight, but I’m sure Van de Beek wants to impress knowing the world will be watching his every move now he plays for United.

In light of the news Mason Greenwood has been sent home early from England duty — for breaking COVID rules along with Man City’s Phil Foden — we could do with something positive like a solid display from Van de Beek.

The match will be shown on Sky Sports Premier League.