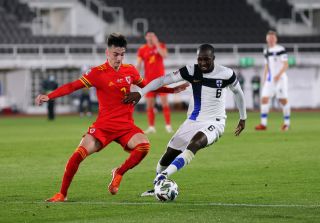 Manchester United midfielder Dylan Levitt is in talks over a loan move to Charlton Athletic.

The 19-year-old was handed his first full Wales debut last week by Ryan Giggs during their Nations League win over Finland.

Levitt got his first taste of first team action under Ole Gunnar Solskjaer last season when the manager blooded a number of United youngsters in the Europa League against Astana.

The youngster is expected to bring plenty of energy to Lee Bowyer’s midfield at Charlton, as per the Mail, and it will be good for his own development to be playing against fully grown professionals every week.

Hopefully Bowyer will rate his as highly as Giggs does because he needs game time in order to develop. It’s a huge step up for Levitt to be playing on the international stage, but he needs to be making the jump from U23 level.

It also feels like the right time to send him out on loan.

Giggs has spoken in the past about Levitt’s mentality and plans to give him more game time.

‘When Dylan was in the [Euro] squad, we had must-win games so I couldn’t really throw him in and put him in that pressure cooker,’ Giggs told United’s official website.

‘But, in training, he’s one of the best. He’s my kind of player — a good character, quiet but tough, and he’s one that I’ll be taking a big look over the next year or so.

‘I want him to develop and if he does and, if he plays more games, then he’ll definitely be in the reckoning. He’s a really intelligent player with a good range of passing and he stands out in training in every session.’

The Mail adds that United are also looking to loan out James Garner, Ethan Laird and Max Taylor.