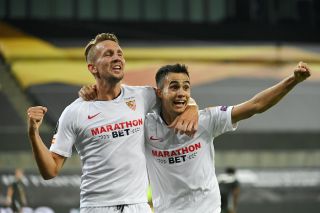 Manchester United are running out of time to get their business done this summer.

The transfer window is open for only four more weeks and it doesn’t sound like United are finished working on a deal for Borussia Dortmund’s Jadon Sancho.

According to the Manchester Evening News, the club is open to signing a left-back, a centre-back and a centre-forward while Sancho’s future hangs in the balance.

Sergio Reguilon is mentioned in the report as a potential solution at left-back. The Spaniard spent last season on loan at Sevilla and assisted an equaliser in their Europa League semi-final against United. He has since returned to Real Madrid but won’t get the game time he wants next season.

But United are monitoring other options such as Vitaliy Mykolenko of Dynamo Kiev. Like Reguilon, the Ukraine international is contracted until 2023.

Moreover, Ole Gunnar Solskjaer wants to bolster the central defensive area but the club has not been as active in looking to help the manager get what he wants… That’s a worrying sign because José Mourinho had the very same problem when he was in charge.

Dayot Upamecano has previously linked with a move to Old Trafford, as per ESPN, but there hasn’t been many updates on that front which is disappointing.

Negotiations over a deal for Sancho are said to be dragging on still but how much time are they willing to spend on that one? United’s first game of the Premier League against Crystal Palace is quickly approaching and we’ve been talking about the Dortmund winger joining us since the end of last season.

The report adds that United are considering a one-year stop-gap in the event they fail to reach a breakthrough for Sancho. Names like Douglas Costa and Ivan Perisic were mentioned as potential loan options.

Whatever happens, we are happy with our first signing of the summer Donny van de Beek.