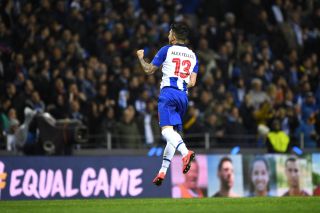 Alex Telles has been linked with Premier League clubs such as Leicester City and Chelsea, but it has now been reported that Manchester United have an eye on the FC Porto left-back.

Monday’s edition of A Bola states United have ‘intensified contacts’ to sign the Brazilian left-back.

This comes after a Manchester Evening News report revealed Ole Gunnar Solskjaer wants like to sign a left-back this summer, with Real Madrid’s Sergio Reguilon and Vitaliy Mykolenko of Dynamo Kiev listed as options.

A Bola explain the deal is so advanced that Telles’ representatives have travelled to Manchester which an aim to conclude a deal. With United’s Premier League opener against Crystal Palace just around the corner, United have a busy week or so ahead of them. It’s far from ideal bringing players in after the domestic campaign has kicked off.

The 27-year-old’s contract with Porto expires in June 2021 so United could be in a strong position at the negotiation table. Also, at this stage of his career, Telles will want to start a new chapter and an opportunity to join one of Europe’s elite.

Porto will find it difficult to demand a huge fee, so this is potentially good news for United fans.

Watch this space — we’ll try our best to fetch any updates on Telles and MUFC.