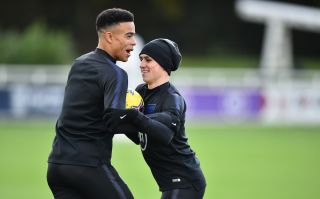 Another day, another story people connected with Manchester United won’t like to read.

Mason Greenwood broke COVID-19 guidelines and measures put in place by The FA to keep players and staff safe.

The Manchester United forward did so with Man City’s Phil Foden — by allegedly inviting two girls to the team hotel — and both youngsters had just received their first England call-up to the senior squad and made their debut. It’s not a good first impression and disappointment can be heard in Gareth Southgate’s voice.

Southgate addressed the press this afternoon ahead of England’s upcoming Nations League match against Denmark.

The England manager would not reveal too much information on the players whereabouts when accompanied by the two girls, though he stressed that they were not in contact with the other England players once he found out and will return to their clubs.

In other words, Greenwood and Foden have been sent home early from England duty.

Gareth Southgate, who is currently speaking to the media ahead of tomorrow’s game, has confirmed Phil Foden and Mason Greenwood will not travel with the #ThreeLions to Denmark.

Check out the video below as Southgate discusses the decision to send Greenwood and Foden home:

BREAKING: Gareth Southgate reveals Phil Foden and Mason Greenwood have broken Covid guidelines and will be travelling back to England pic.twitter.com/Fnwdq5F3bL

Manchester United issued a statement on Greenwood making it clear they are disappointed, as per Samuel Luckhurst of the Manchester Evening News:

‘Manchester United are liaising with the Football Association and are disappointed with the actions of Mason Greenwood over this situation.’

Statement from #mufc on Mason Greenwood: 'Manchester United are liaising with the Football Association and are disappointed with the actions of Mason Greenwood over this situation.' Club don't expect Greenwood will have to quarantine as there's no travel restriction with Iceland.

Luckhurst adds that United don’t think Greenwood will need to quarantine as there’s no travel restriction with Iceland.