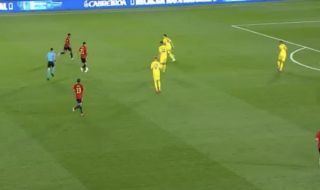 Manchester United summer transfer targets Sergio Reguilon and Ansu Fati are both in action this evening for Spain who are taking on Ukraine in the Nations League.

Reguilon, 23, has been relentlessly linked with a summer switch to United in recent weeks after it was reported by leading journalist Fabrizio Romano that Real Madrid have offered the attacking full-back to Ole Gunnar Solskjaer.

Sergio Reguilón has been offered to Man United. The board and Ole are considering him as an ‘option’. They’re gonna decide soon. Also Sevilla have asked to have him back on loan from Real Madrid. The race is still on [also for other clubs]. 🔴 #MUFC #RealMadrid #transfers

Elsewhere, it has also been reported that the Reds may consider a summer swoop for Barcelona’s wonderkid Fati as Solskjaer may be forced to consider the youngster as an alternative to number-one target Jadon Sancho, as per Sport. 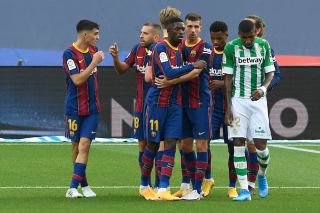 Both internationals linked-up superbly in tonight’s game as Spain extended their first-half lead to 3-0 against Ukraine.

Reguilon set his team-mate up who in turn smashed the ball home and became Spain’s youngster ever goal scorer.

Not a bad night’s work, so far.