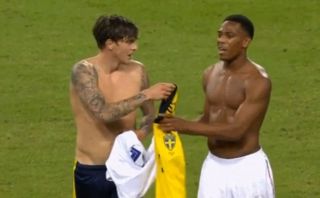 A moment of individual brilliance from Kylian Mbappe gave France a 1-0 win away to Sweden in their Nations League A Group 3 clash on Saturday.

Paul Pogba was ruled out of the match after testing positive for COVID-19, as per Sky Sports, but there was still two Manchester United players involved in the game.

Anthony Martial, who was in the France squad for the first time since March 2018, came on in the second half for Mbappe and won a late penalty after being fouled inside the box by Victor Lindelof.

However, Antoine Griezmann sent his spot kick over the bar just before the final whistle was blown.

Martial and Lindelof were seen after the match exchanging shirts.