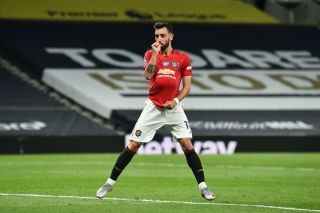 Manchester United took to Twitter to congratulate star player Bruno Fernandes on the birth of his second child with Ana.

After a hectic 2019-20 campaign and a shortened summer break, Fernandes has been kept on his toes awaiting the arrival of his new baby. The bundle of joy will have him in a happy mindset as we approach the new season and it’s brilliant news no matter what way you look at it.

Fernandes keeps his fans updated on Instagram and often shares footage of his young daughter kicking footballs or copying his goal celebration. He seems a family-oriented guy.

Manchester United (@ManUtd) tweeted: “Big congratulations to @B_Fernandes8 and his partner, Ana, on the birth of their second child.”

Big congratulations to @B_Fernandes8 and his partner, Ana, on the birth of their second child 👶🎉#MUFC pic.twitter.com/EO9OAYe501

With the arrival of Donny van de Beek from Ajax, we are really looking forward to seeing how our midfield looks next season but it goes without saying that Fernandes will be the focus point of United’s creativity in the middle.

I’m sure Fernandes is one of the players Van de Beek is most excited about working with at United — as well as Paul Pogba.