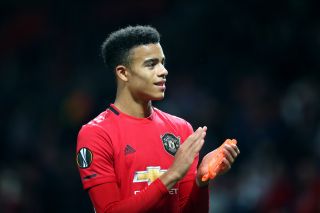 People get excited over the smallest of things.

According to the Manchester Evening News, “Manchester United fans have been sent wild” by Mason Greenwood deciding to follow Sergio Reguilon on Instagram.

There are lots of United fans monitoring Reguilon for transfer news since the Real Madrid left-back was offered to the Red Devils, as per transfer guru Fabrizio Romano.

Ole Gunnar Solskjaer made his first signing of the summer earlier in the week when Donny van de Beek completed his move from Ajax, but as you should expect, fans are hungry for more signings.

Still, I think it’s a stretch to say fans are going wild over some social media activity.

Reguilon would be a terrific buy for Solskjaer as he builds for the future. I am not convinced he’s overjoyed with Luke Shaw at left-back and it’s early days for Brandon Williams. It’s not every summer you get the opportunity to sign a world-class left-back at a cut price.

Very weird one to explain that lol how do you make sense of Mason following Sergio, without the potential transfer cloud hanging around it.

He followed him yesterday

Read more: John Barnes thinks it would be a mistake if Jack Grealish signed for Manchester United