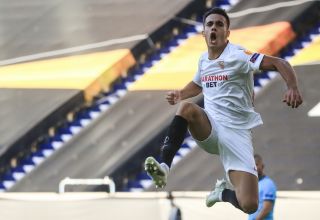 There has been a lot of excitement during the past week in relation to Manchester United and Real Madrid defender Sergio Reguilon, the left-back who assisted Sevilla’s equaliser against the Reds in the Europa League semi-finals.

We’ve got Luke Shaw currently at left-back who has shown signs of improvement, although I wouldn’t be under the impression Ole Gunnar Solskjaer is ultimately convinced United are strong enough in that area.

Brandon Williams looks a prospect and was a real addition to the first-team last season. He pushed Shaw on and has a bite to him you want in your side. This season, Williams will be aiming for more minutes on the pitch but the idea of more competition is a wise one, even if it means cutting our transfer budget significantly.

Reports in Spain, as per AS, claim Real Madrid are open to selling Reguilon for between €25m and €30m – though they would demand a buyback option at that price. I can’t imagine United ever warming to the idea of the latter, we don’t conduct business like that.

But the price sounds good for a player of Reguilon’s ability and I think he’d definitely start for United. It feels like an opportunity to sign a brilliant defender to strengthen the side, United have a massive pull factor, and Madrid are in a position to negotiate.

Italian journalist Fabrizio Romano, who has a brilliant track record when it comes to transfer news, says Reguilon has been offered to Manchester United and a decision from the club will be made soon.

Romano replied to a Twitter user asking about Regulion, writing: “Reguilon has been offered to Man Utd and they’re gonna decide soon.”

United get offered hundreds of players every year but there’s little to no point getting excited about it until their stance on Reguilon is known. Reguilon is on the market, looking for a move because he won’t get sufficient game time at Madrid, so that’s where we are now.

No talks or real interest from United, which is what matters here.