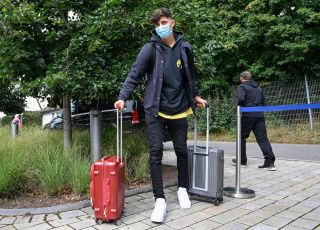 Manchester United reportedly opted against signing former Bayer Leverkusen midfielder Kai Havertz because they saw the young German as an alternative to number-one target Jadon Sancho as opposed to an addition.

Havertz, 21, joined Premier League rivals Chelsea from the Bundesliga side earlier this week in a move worth £75.8m, as per Sky Sports.

The attacking midfielder became one of this summer’s hottest prospects after enjoying a thoroughly impressive campaign last season with Bayer Leverkusen after being directly involved in 27 goals in 45 appearances in all competitions.

According to Manchester Evening News United boss Ole Gunnar Solskjaer opted against rivalling Chelsea for Havertz’s signature after the club highlighted him as being an alternative and not an addition to number-one target Sancho.

Sancho, 20, who is reportedly valued at upwards of £100m, as per The Times is understood to be the Red’s summer priority but talks between camps are stalling after it was reported by Sky Sports News’ James Cooper that Sancho’s representatives are demanding ‘outrageous’ fees.

Irrespective of whether or not United manage to secure Dortmund’s Sancho in time for next season, the Premier League has become a better league for Havertz’s arrival.

The elite attacking midfielder is destined to be the face of German football for the next 10-years and his decision to join England’s top-flight further showcases why the Premier League is known for being the most competitive league in the world.