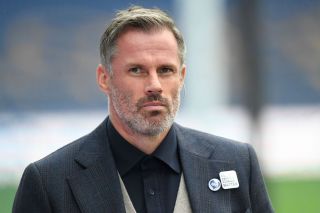 Liverpool legend Jamie Carragher has made a shock admission that his former side’s arch-rivals Manchester United are ‘not that far away’ from being Premier League title challengers and could go onto lift the trophy if they finalise the signing of Jadon Sancho.

Carragher, 42, made his name becoming a Liverpool legend after the defender made over 500 appearances for the Merseyside club and was a major part of the team which won the famous 2005 Champions League final against AC Milan.

The retired Englishman who now works as a football pundit has admitted that arch-rivals United ‘aren’t as far away’ from being Premier League title winners as people may think.

Speaking in his column for the Sunday Times Carragher said: “I have always thought that one or two little things can turn it – and, for me, signing Bruno Fernandes in January has completely changed United.

“That is only one signing. He came in and suddenly United were a totally different team.

“That’s how close it is. It could be that Jadon Sancho comes in and then United are challenging for the title. They are not as far away as people think.

“One or two more signing could make the difference.”

Prior to Fernandes’ arrival in January United were stuck in seventh place in the table and after the attacker racked up an impressive 15 goal contributions in just 14 domestic appearances, the Reds went onto surge up the table and finish in third place.

Carragher believes that Sancho’s proposed transfer could have a similar effect on United who will be hoping to continue to close the gap on Premier League runaways; Liverpool and noisy neighbours Manchester City.

The potential signing of Sancho would cost United upwards of £100m, as per The Times but the Reds now face a race against time if they’re to land the highly-rated English attacker ahead of next season after it was reported by Sky Sports News’ James Cooper that the deal is stalling because of ‘outrageous’ agent fees.

United are now preparing for the start of their 2020-21 domestic campaign which is scheduled to kick-off on September 19 against Crystal Palace and the United faithful will certainly be hoping Sancho is among those wearing the famous red shirt come matchday.