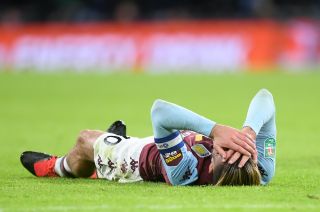 The 24-year-old was called up to the senior England squad for the first time last week after a season which saw him save his boyhood club from relegation. This will come as a huge milestone for Grealish and it’s something he would have achieved earlier had he played for a bigger club.

Grealish was Villa’s star player and his form led to links to Manchester United via The Athletic.

However, Stretty News understands that the recent signing of Donny van de Beek has ruled United out of the running for Grealish.

It would do more harm than good to Grealish’s chances of getting into the England squad if he was to join the Red Devils this summer because he wouldn’t be guaranteed a starting place in the team.

Speaking about Grealish’s future, Barnes doesn’t think the playmaker would get the game time he needs at United.

“I don’t think that going to Manchester United or a bigger team will help his England chances at all,” Barnes told BonusCodeBets, as quoted by the Metro.

“Playing for a bigger club should not mean you have a more likely chance of being in the England team. Being at a bigger club and playing regularly in the Champions League, playing well and scoring goals will help you, but Jack Grealish will not be the number one player at a team like Manchester United.”