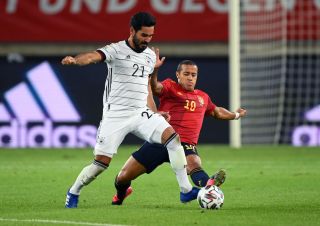 Thiago Alcantara sounds like he is sick and tired of the constant speculation surrounding his future.

It has been reported that the Spain international wants a new challenge and is set to leave Champions League-winners Bayern Munich (per GOAL).

According to Dagbladet reporter Fredik Filtvedt, Solskjaer has already spoken to Thiago to discuss a potential switch to Old Trafford this summer.

Liverpool’s pursuit has been more constant and they’ve seemed the most keen of the parties interested in Thiago — however, transfer guru Fabrizio Romano claims they have contacted Gini Wijnaldum’s agent and are expected to launch an offer in the coming days. If Liverpool decide to cash in then they will reportedly firm up plans to sign Thiago as his replacement.

“Price tag always around €30m. Contacts still on with his agent.”

Thiago has now claimed there is no certainty he’ll even leave Bayern Munich — despite the fact his contract expires in 2021.

‘I have not told anyone that I am leaving. Every year you (the media) put me in a different club,’ he said, reported in the Mail.

‘For me my future is Sunday’s game and there is no topic on this. I don’t care one bit. I’m only interested in tomorrow’s game.

‘I always think that the current moment is the best we can live in. I am physically very well. Having come from Lisbon I’m on a roll, but I think that the following year I will be better.’

Thiago never felt like a cert to happen and he’ll probably end up staying at Bayern next season. The Bundesliga giants won’t fancy losing him on a free and that might lead them to offering a short extension deal.

It would be great to see Thiago at Old Trafford — he’s incredibly gifted and one of the best midfielders in the world — but I wouldn’t get excited over a deal that never looked like happening in the first place.