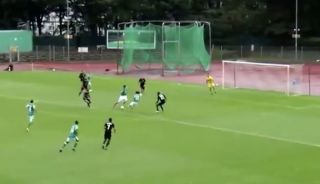 Manchester United’s on-loan youngster Tahith Chong was back in action earlier today when his temporary club Werder Bremen took on BSV SW Rehden. Chong bagged a superb brace as his current side romped to a 7-0 pre-season friendly win.

Chong, 20, joined the German side on-loan earlier this summer in a bid to continue his development as he hopes to push for a United starting place in the near future.

The young Dutchman has taken to life in Germany like a duck to water with his latest impressive display coming earlier today after he bagged a superb brace in his side’s 7-0 thrashing win.

Another day, another goal for Chong 🤩 pic.twitter.com/vZ9N3MZGeB

Read more: Man United to consider Burnley’s Dwight McNeil despite letting him go as a youngster