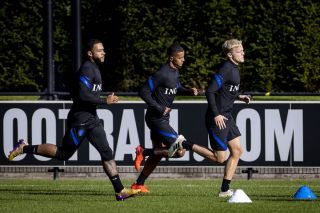 Pierre van Hooijdonk believes a fellow countryman has moved to Manchester United at the right time.

Donny van de Beek became United’s first transfer of the summer this week and leaves behind an Ajax team that have been dealt a blow by his exit.

The midfielder has joined the Red Devils at the “perfect time”, says Van Hooijdonk, with the former Netherlands international admitting that Van de Beek had become “too good” for Ajax.

That happens and the best players decide to leave their comfort zone and challenge themselves. Van de Beek is joining a United side in transition and knows pundits will be watching his every move.

The 23-year-old left Ajax after 12-years with the club, having joined their academy in 2008 and worked his way up to the first team, and he was part of the excellent team that reached the Champions League semi-finals two seasons ago.

Van de Beek agreed to terms with United with Ajax benefit from a £35m transfer fee, as per BBC Sport.

However, Van Hooijdonk expects plenty of value to be found in the deal as he tips Van de Beek to thrive in the Premier League. He told United’s Group Chat (quotes via GOAL): “I think Man United signed an excellent player.

“He’s still a young man but he is an example to a professional of how you should develop as young boy — coming through the ranks at Ajax and step by step getting to a level where you are too good to play in this league.

“He came to this point. It is then the perfect time to join a big club. When you join a big club after following that path you are going to be a regular for sure.

“There are many examples of young players who were signed up by the likes of United, Arsenal, Chelsea, City but they are signed at a younger age and are not mature yet and they have too try and develop in the youth system and they are sent out on loan to get experience. In my opinion, this is the best way to develop as a young boy and this is the step at the right time.”

He added some insight around Van de Beek’s game, with the midfielder delivering 41 goals and 34 assists during his time in the Ajax first team: “Physically, his body is strong enough to be a professional player — not many injuries during his career so far.

“His main strength is as a box to box player — great football brain and always there where the ball can come, and a great finisher.”

He was also complementary of Ole’s approach as United manager: “Under Solskjaer we have seen a lot of youngsters getting their chance in the team.

Read more: Man United to consider Burnley’s Dwight McNeil despite letting him go as a youngster