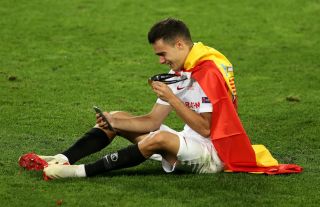 As reported yesterday by Spanish publication Sport, United have tabled a €30m offer for the full-back who is no longer in Zinedine Zidane’s plans at the Bernabeu.

Reguilon played against United last season in the Europa League semi-final, assisting Sevilla’s equaliser in their 2-1 win. That’s where he spent last season on loan but Sport claim Real Madrid will make a decision early next over whether they should send him out temporarily again or sell him.

PSG, Juventus, Napoli and Tottenham are all credited with interest in the defender.

United’s interest in Reguilon is now being widely reported but it is unclear whether Ole Gunnar Solskjaer will make the signing knowing that he needs to prioritise other areas of the pitch ahead of next season.

That said, a full-back this good doesn’t usually come available at a cut price, with Madrid already being well-stocked at left-back and having to make a decision on the player’s future.

When I seen him play I thought he was excellent. Too good to read shortly after Real Madrid faced a dilemma and may need to let him go. Every top club wanting to strengthen at left-back should be all over him.

Romano’s version of events is different, however — he claims that a deal for the Real Madrid man is ‘not advanced yet with Man United — proposed to many clubs.’ This suggests United’s name could be used to help accelerate interest in the player. I’m not saying that is the case but it’s what happened prior to Arsenal agreeing on a deal with Lille for Gabriel Magalhaes. The centre-back cost the Gunners £27m, as per the Daily Mail.

not advanced yet with Man Utd – proposed to many clubs

Reguilon is good enough to start for United and signing him would go a long way towards improving squad depth, with Luke Shaw and Brandon Williams both having good seasons last term.

Competition for places is good.