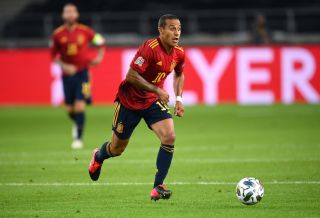 Fabrizio Romano, a football journalist renowned for updating his followers on social media with transfer news, has dropped a cryptic Thiago message on Instagram.

The post was shared as a follow up to Romano’s update stating Kai Havertz will join Chelsea from Bayer Leverkusen. He said (via Instagram): “Also Thiago saga to start now… 👀”

This probably gives Liverpool fans more reason to be excited over the prospect of signing the Bayern Munich midfielder. He is good enough to improve any side in the Premier League, at 29, and it’s the Scousers who have been mentioned continuously in newspaper reports.

Romano doesn’t give much away with this update, of course, so we can’t completely ignore the fact Thiago has been a reported target for United too.

Take a look at the screenshot below:

Here we go? @FabrizioRomano update on Thiago via Ig. pic.twitter.com/GZjJX3T3Qw

The last update we ran was from German reporter Christian Falk earlier this week. He outlined that Manchester United have yet to make an offer, but talks between Bayern and Liverpool are ongoing.

Well connected Norwegian journalist reporting that Man UTD are in for Thiago as well.

Fredrik has had a big “hit-rate” on Manchester United – news.

The two old rivals battling for Thiago. And CEO at Bayern expect an offer the coming days. This could be an BIG week https://t.co/05oKgj2qWy