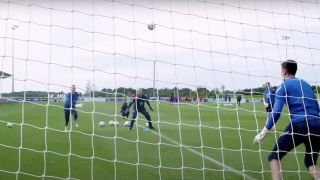 Manchester United’s Dean Henderson is known for keeping shots out of the goal not smashing them in on the half-volley but whilst in training with the England squad, the 23-year-old keeper did exactly that.

Domestically, the United keeper will head into next season challenging Spanish international David De Gea for the right to wear the famous United number-one jersey.

However, with still a couple of weeks to go until United’s season gets underway, players are currently away on international duty preparing for their Nations League matches.

During training with England, Henderson, alongside Burnley’s Nick Pope and Everton’s Jordan Henderson were practicing their shot-stopping.

Whilst Pope was in-between the sticks, Henderson took a chance to smash the ball in on the half-volley. The 23-year-old’s striking efforts were clearly appreciated by the England coaching staff who couldn’t believe what they’d just seen.